Saturday 5th September will be a day that many will never forget as the Irish leg of the UK and Ireland Tree Climbing Competitions yielded its first Irish Winner, Donal Roe. The competition was Originally organized for the Saturday and Sunday with plans for trade stands and a greater public presence, but due to unforeseen circumstances the event took place as an exciting and exhilarating Jamboree with a reduced but dedicated team of Judges and Technicians.
The number of climbers was also reduced, but the stakes were high from the very beginning, with one place remaining on the team, for the European Championship!

Proceedings began on the Friday with a Tree-climbing workshop hosted by Kevin Birchall (Tree Care Ireland) and attended by students from Moulton College. Boal Hammarstrand and Cam assisted as technicians during the Aerial rescue demonstrations and valuable competition experience and guidance from Jess West and Simon was greatly appreciated by all present. Many of the students were so enthused that they decided to enter the competition and open their minds to the entire experience as the day of preparation unfolded. As the Workshop came to a close around the impressive ‘Workclimb’ tree we were all given a final treat as Craig Johnson descended from the lofty crown with an hour of rope tricks, knots and gadgets.
The warmth of our ‘Indian Summer’ and pure blue skies provided the backdrop for an evening of kite flying, final equipment preparations and laughter around the campfire.
Many of the competitors appeared to have arrived during the night or very early on the Saturday morning, but a few were still joining whilst climbing gear was being scrutinised and T-shirts were being handed out.
With a final tally of 22 climbers, 3 Judges and a hand full of Technicians, the events began with 3 groups for Aerial Rescue, Workclimb and Throwline in rotation. Craig judged the workclimb, Paul Spooner (Tree Care Ireland) judged the Throwline and Kevin Birchall, Aerial Rescue. Sustainance was provided in the form of sandwiches, lovingly prepared by Bernie Cassidy and the afternoon continued with an interesting Speedclimb and Footlock events. In the past the speedclimb was mostly a scramble to the top of the tallest tree we could find, but this year two additional bells were placed out on limbs and the climber was allowed to control a friction hitch to reach them. The general feeling was that this event is now a more realistic simulation of work practices along with the slack tending belay system.
As the last few climbers were readying themselves for the Footlock, the competition was still open with some close scores at the top of the leader board. Places for the Masters Challenge were announced as the final event came to a close.

Posted by THE TREE TRIBE at 7:18 AM No comments:

Congratulations to Donal Roe who had a great masters climb to take the title.

There will be NO climbing on Sunday 6th so unless you want to help to clean up don't go to Lisnavagh. 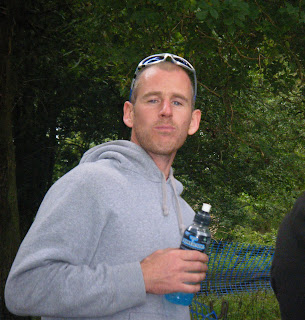