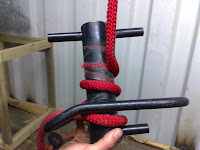 Just a quick post to share a rigging accident. With all the skills, training, risk assessment and experience that are generally soaked into good arborists, accidents do happen and equipment does let you down. I was given the photo to the right about two years ago by a customer that had purchased the black lowering device that you can see.
He was 'snatching' a relatively small section of stem and the groundsman was allowing the piece of timber to run as it fell, but as this was happening the 16mm Marlow stable braid rope melted to the capstan and fused with the black paint covering the device!

When visualising this event you might think at first that both the climber and groundsman would just be confused as the system locked up, but that no harm would come from it, apart from the damage to rope and capstan. However, the following occured; as the timber came to an abrupt halt the resulting shock force over-loaded the sling holding the lowering pulley, snapping it at the splice and yanking the pulley out of the tree. The tail end of the sling then whipped around the stem and slapped the climber on the back of the head.

No one was hurt, nothing was damaged from the fall but issues were certainly raised over the usefulness of the painted capstan. No explanation was ever given.
If you can shed any light on this issue please make a comment. Have you ever fancied a career working in Trees? Has the thought of taking up an exciting, well paid career in the canopy interested you?
Perhaps you already climb trees and want to update your skills or you work in the landscape industries and want to broaden the services you can offer to your customers.

Maybe you would like to project a more professional image.

Well now is the time to have a closer look at some of the skills that are available through training with TreeCareIreland and achieving NPTC City and Guilds Awards. 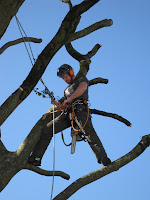 TreeCare Ireland together with City and Guilds centre, Absolute Training Services will be providing the opportunity for you to talk to Instructors, Assessors and Tree service providers about the skills required for one of the most exhilerating jobs in the land-based sector.
"We would like to connect you with people that work with trees and can answer your questions."

"We would like to create an open forum for discussion about qualifications, courses, equipment and skills."

"We would like to be on hand each day to give honest, FREE advice about trees and tree care."

We have also provided a widget below for instant contact. This is a secure method with a comment box for your questions. We have asked for your phone number. If you would like us to call you to discuss anything please ask. We are always delighted to talk.